Ode to Sandburg Is Delivered with Passion 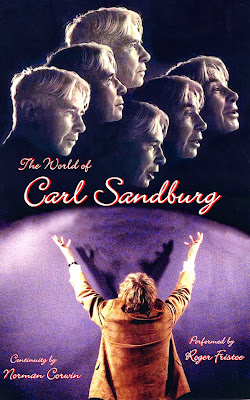 The World of Carl Sandburg

The World of Carl Sandburg first premiered as a two-person play on Broadway in 1960 starring Bette Davis and Gary Merrill, and Roger Fristoe has been performing it in one version or another since the early 1970s. After seeing the production at The Vault1031, it’s hard to imagine the play as a two-actor piece because Mr. Fristoe pulls the program off so flawlessly on his own, it was almost as if it was supposed to be that way.

Carl Sandburg’s career as a writer dared to be classified as any one thing. He wrote novels, biographies, poetry and children’s stories, and he won two Pulitzer Prizes. He wrote from his heart and he wrote what he saw in life every day. His writing is evocative, humorous and easily accessible and stands up surprisingly well for a modern ear.  He never wrote a play, but his work is so dramatic and rich in character that it works very well on the stage.
The World of Carl Sandburg is a presentation of the writer’s canon that follows Sandburg’s work through a life cycle of sorts, beginning with his writings on birth, childhood, moving to adolescence, adulthood, climaxing in his words about Abraham Lincoln and finally on death. As a P.S. to the audience, Mr. Fristoe chooses to end the night on a lovely poem questioning love and what it is – a good choice as no one wants to leave the theatre thinking about dying.

Mr. Fristoe is, in a word, fantastic. His passion and love for the material and the words were evident from the moment the show began, and I was captured from beginning to end. He was funny, he was witty, and he brings candor and simplicity to the words. His raw emotion during one particularly moving section was sublime; the audience didn’t breathe and we were all moved beyond anything we were anticipating.

At one point in the program Mr. Fristoe invites a 17-year-old senior from Fern Creek High School, Gabe Tomlin, onstage to do his own modern poetry-slam style performance of Sandburg’s poem Chicago. He’s part of Generation iSpeak, an organization that, among other things, brings a team of Louisville poets at Brave New Voices, the world’s largest international youth poetry slam. The moment was a melding of something wise and mature with something young and impulsive, and it was wonderful. Mr. Tomlin sprung to the stage, and even Mr. Sandburg himself would have been impressed. He spoke the words from his own heart and impacted all of us. I could have watched him go back and forth with Mr. Fristoe all night. It was inspired and it was such a smart way for Mr. Fristoe to modernize the text and make it completely contemporary.

To top it all off, Mr. Fristoe is donating all the proceeds of the performances to The Vault1031. If you’ve been to a Play Slam or a class or had rehearsal there, you already know what a worthy cause it is. The show has a limited three-performance run, but if you’re free this weekend I would highly recommend it. As someone who wasn’t particularly familiar with Sandburg’s work, I found myself completely entranced with his words perfectly communicated by Mr. Fristoe with respect, passion and love.


Posted by Arts-Louisville at 7:49 AM