Parody and Fable: "Suckers" Keeps Its Tongue Firmly in Cheek at The Alley 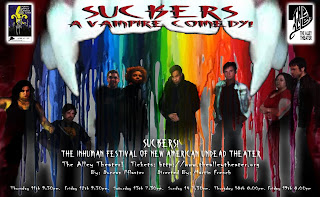 
A review by Kate Barry

This is certainly the season of original play festivals. Something about the blooming buds of spring just makes these local theater companies want to showcase new works. The Alley Theater has put together a festival with a morbid theme, asking playwrights from all over to write about the undead and other spooky things. The result is InHuman: A Festival of New American Undead Theater, now in its second year. Among these plays of all genres is Suckers. Half parody of a disenfranchised counter culture and half fable of faith, this play, from start to finish, has its tongue firmly planted in cheek.

Suckers is a full-length play with a small cast dressed in costume pieces straight out of Hot Topic, and donning black make-up and nail polish. The play contains a typical plot relating to things that go bump in the night: a young couple meander into a seemingly innocen-looking setting and are quickly launched into a predicament concerning mortality and livelihood. Romaine, played by Pam Newman, is sassy, strong and intelligent; where Jeremy Gernert, the straight man willing to drop his pants for a laugh, plays her boy-next-door boyfriend, Jeff. My attention was constantly on Newman in every scene, whether she was having minor panic attacks about bloodthirsty ticks or defending her faith against a slightly flamboyant vampire. Her natural timing created a standard that went above and beyond her cast members yet remained grounded.

As for the crew of vampires, Duncan Pflaster has written creatures of the night that are highly fashionable in the ways of the latest trends, so over poseurs and are quite aware that no one understands them and that’s how they like it. And most importantly, these trendy vampires aren’t sparkly-like some others. The head of the vampires is Elvis, played by Kenn Parks. As the leader of the pack, this vampire strikes with intimidation and fear as he reminds his fellow vampires who’s in charge at all times. With a hint of sexual ambiguity, this vampire alpha dog must not be fooled, yet the performance lacked dominance, especially in scenes with Newman’s Romaine. Parks had plenty of moments where his confidence as a lead actor could have pushed his performance into the realm of the mysterious: aloof and comedic. Paired with Newman’s intelligent Romaine, Parks’ vampire didn’t stand a chance yet his seductive and cool presence on stage was commanding.

Rounding out the cast is Katie Hay as Kendal, partnered with Brian Kennedy as Rich, each of whom is supplied with the show’s best double entendre about trends and fashions. Their moments of bashing mainstream culture in their coffee shop reminded me of my days as a teenage would-be nonconformist. As Raquel, Kimby Peterson is the girl who tries too hard yet enjoys the biggest plot twist of the entire play. Daniel Smith as Harry and Micah Cassidy as David provide comedic support as well.

The Alley Theater is lucky to have a relevant and fresh script that also makes for a spooky tale. Whether you buy into the current vampire craze that’s been sweeping the nation, or if you’re just curious about the InHuman festival, Suckers is worth checking out.

Part of the Inhuman: A Festival of New American Undead Theater