Playwright Anne Washburn enjoys challenging her actors, directors, designers and audiences. I know this because she told Adrien-Alice Hansel in an interview published by Inside Actors 35th Annual Humana Festival of New American Plays, "It's so engaging to watch actors rise to ridiculous demands when they're performing." She didn't specifically mention the audience, but having seen A Devil at Noon I can tell you confidently of my own certain knowledge that Anne Washburn has created a funny, thoughtful and challenging work for us.

Before I get to the actors, et al I want to give some much-deserved praise and thanks to sound designer Matt Hubbs and the unnamed techs who run the sound board. Director Steve Cosson, who is the artistic director of The Civilians--a New York company that has produced several of Washburn's earlier works, has created through the use of sound (Hubbs), Lighting (Jeff Nellis) and Media (Philip Allgeier) an opportunity for the audience to explore Washburn's ideas unimpeded. The beauty of the playwright's concept, inspired in part by science fiction author Philp K. Dick (Blade Runner, Minority Report), and his struggle with reality as it is commonly defined, requires that the experience be presented to the audience through as few filters as possible. Cosson and the cast of A Devil at Noon make extensive use of mime to give us entry to the character's inner world. This is an elegant solution to the intrinsic problem created by Washburn's concept of "Pleasurable alienation," the attempt to capture the character's own lack of understanding and their attempts to make sense of an increasingly complex world.

It is rare in my experience for a cast to give an impeccable performance during previews. If they have the lines down and execute the blocking with some precision you can label it a success. Character refinement usually comes later. The cast of A Devil at Noon will almost certainly continue to make discoveries about their characters that will enhance the performance, but on opening night they were already transparent guides to the soul of the play. Led by Joseph Adams as the Philip K. Dick-inspired novelist and Rebecca Hart as Lois, the girl who shows up inexplicably on his doorstep the company presents a beautifully choreographed dance between intersecting planes of possibility.

Actors Theatre of Louisville artistic director Marc Masterson has chosen a colorful downbeat for the festival. I look forward to speaking with him about that and sharing the interview with you hear in the near future. Check here during the next several weeks and you will have an opportunity to meet playwright Anne Washburn, Director Steve Cosson and others involved in the Humana Festival of New American plays. 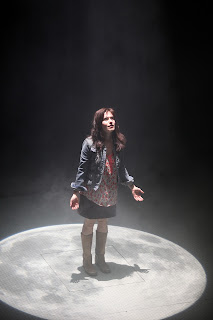 A Devil at Noon runs through April 3, 2011 in the Bingham Theatre of Actors Theatre of Louisville. Special rates are available for residents to be part of this international event. For more information go to www.actorstheatre.org or call the box office at 502.584.1205.