Tennesee Williams Is Given Mature and Disciplined Production at Walden Theatre 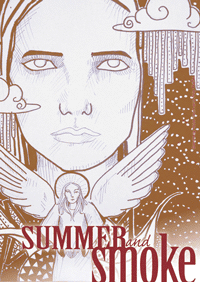 Summer and Smoke is a less frequently performed Tennessee Williams play but a beautiful one. It deals with small town life, a world that is probably less eventful than the world of A Street Named Desire; but the inner lives of the characters are psychologically complex and compelling. The young actors at Walden Theatre face the challenge of the play with a striking amount of maturity and discipline.

The story centers on the high-strung Alma, so high-strung that she often makes herself sick. Alma, the daughter of a minister, is deeply in love with John, the son of the doctor next door, and has been since childhood. The play opens with an honestly rendered scene between the young John and young Alma (Roscoe Lindsay-Burns and Lilly Rich). John, throughout the course of the play, goes from being a drunk and life-loving womanizer to a domestic doctor ready to settle down. The two have opposite philosophies on human nature, John believing in the carnal and Alma connected to higher things.

Alma is played by Chloe Bell with a tremulous voice and uneasy nervous energy. Miss Bell has an expressive face; and when she lets her guard down and shows some true vulnerability, she is at her best. Her monologue at the end is beautiful and specific and comes from a place of long-held desire spilling out. I would like to have seen more of the transformation of Alma, physically and vocally, from the uptight moralistic woman to the one who wants to be sexually free. If this shift were clearer, John’s rejection of her in the end would be more powerful.

Ciaran Brown plays John Buchanan in a surprisingly subtle and understated manner that is quite nice in contrast to the frantic energy of Alma. There is also strong support from the rest of the cast, including Sean Campbell as Alma’s father, Rev. Winemiller. The establishment of the parent-child relationship is very good and believable in spite of everyone being of similar age.

I did get a little confused about the passage of time. The characters do not change costumes, and that’s okay. But it took me a while to realize that things were happening throughout a summer rather than during one day in the summer. Maybe some subtle indication that time was passing would have helped clear that up.

This play is especially great for young actors because it deals with the themes of identity and love. There is also the question of how far a person should change himself or herself for love. Each of the actors does it convincingly, and I often forgot that I was watching a young production and simply enjoyed the story.