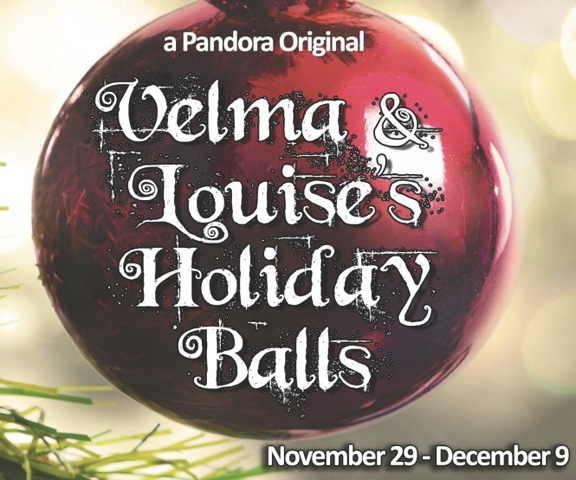 Original plays are a hit-and-miss affair in the Louisville area, especially when they are full-length productions. Even the best ones seem to have moments when the dialogue falls flat, a joke lands with a thud, or a subplot seems to go nowhere. I think it’s because, unlike the big shows that end up on Broadway or other major venues, these plays don’t get workshopped for years before their grand opening.  An original play in Louisville is lucky to get six weeks of rehearsal between the moment the playwright turns in his final draft and opening night.

I’m delighted to say that Pandora’s latest offering, Jim Hesselman’s Thelma & Louise’s Holiday Balls, has managed to avoid that pitfall for the most part, simply by being so ridiculously over-the-top that you don’t have time to consider its shortcomings. It has a fun concept at its center and a cast of skilled performers who keep the jokes coming so fast and furious that even when one bombs, the next one makes you forget it. The result is a show that, while not perfect, is a hell of a lot of fun.

Its setup is a bit cliché, but it works.  The two title characters, a pair of Bible-thumping church ladies, put on a public-access cable Christmas show every year. This year, unfortunately, their studio has flooded and they are forced to find another venue. One of the ladies has a gay nephew (and, of course, they have no clue about his sexuality) who puts on an annual live cabaret Christmas show at a local nightclub. After some coaxing (and with no clue that it is a gay club), the two convince the nephew to combine the shows for the cable broadcast. This, of course, leads to a lot of misunderstandings and pratfalls among the lively skits and musical numbers that follow.

It’s a credit to Hesselman’s writing that he has created a gay-themed show that doesn’t rely on vulgarity and sex to entertain, making this a surprisingly family-friendly piece (something very rare in gay-themed theater). There were several children in the audience during the performance I attended, and I can honestly say there was really nothing in the show that seemed inappropriate for them.

It’s also an interesting contrast to the only other Hesselman-penned show I’ve seen – the faith-based Christmas jukebox musical SING HALLELUJAH! – in a production at the Derby Dinner Playhouse five years ago. Both shows use existing songs to propel their yuletide storylines; but they take such vastly different views on faith during the holidays that it’s amazing they were written by the same man. Obviously, this is one local playwright to keep an eye on.

As for the cast, there was not a weak performer in the lot. As Velma and Louise, Alex Craig and Jason Cooper are quite convincing in old-lady drag (although Cooper does seem to hide his masculinity a bit better), and they both have a lot of great moments. Robbie Lewis and Patrick Brophy are just precious as the nephew and his boyfriend/business partner, respectively; and C. C. Winters (a nom de plume of one of Pandora’s major players) is a riot (and nearly unrecognizable) as drag queen Candy Cane. And in smaller supporting roles, Trent Everett Byers, Susan Crocker and Richie Goff have some great moments.

I was going to make some mention of a few of the show’s flaws, but after reviewing them it seemed like splitting hairs. I had a great time experiencing this production, and I’m sure you will too.