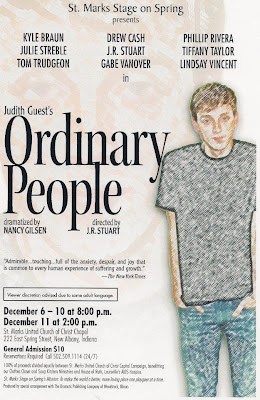 Based on the Novel by Judith Guest
Dramatized by Nancy Gilsenan
Directed by J. R. Stuart
Reviewed by Craig Nolan Highley
Entire contents are copyright © 2011, Craig Nolan Highley. All rights reserved.
Performed in a brightly lit chapel in a church on Spring Street in New Albany, it is obvious right from the start that Ordinary People is anything but an ordinary production.
Adapted from Judith Guest’s landmark 1976 novel that famously inspired the multiple Oscar-winning 1980 Robert Redford film, the story holds up well in today’s more jaded times. Although Nancy Gilsenan’s rather blunt dramatization loses some of the grace of Guest’s original novel and the subtlety of Alvin Sargent's screenplay, the story still resonates, thanks to solid acting from the ensemble and strong direction by J. R. Stuart.
It’s a heartbreaking story, dealing with one family’s struggle to cope after two traumatic events: the accidental drowning of one son, and the attempted suicide of the other. We are dropped into the story over a year later, when the surviving son is returning home after being committed to a mental hospital and the family is struggling to return to a sense of normalcy.
It’s largely an ensemble piece, but it does center on the dynamics of three core characters, thankfully performed by strong actors up to the challenge.
Kyle Braun takes the central role of Conrad Jarrett, the surviving son, who is still struggling with issues of survivor’s guilt and depression that threaten to cripple him. It is hands down the best performance I’ve seen from this actor; I was moved to tears more than once by his character’s anguish, and I challenge anyone not to squirm while he is describing his character’s suicide attempt in graphic detail.
Tiffany Taylor does great work with the show’s antagonist, Conrad’s mother, Beth. A force of nature, Beth has not come to terms with her older son’s death and is openly resentful of Conrad to the point that she has become jaded and cold. Gilsenan’s script robs the character of a lot of the sympathy generated in the novel and film, but Taylor makes her real and relatable nonetheless. While we may despise her actions, we have all known people like Beth Jarrett and can relate to the character Taylor has created.
At the other extreme, Gilsenan’s adaptation of Conrad’s father, Cal, is almost too perfect to be believable but again is made relatable by a strong performance. As played by Tom Trudgeon, Cal is the dad we all wish we had, keeping his head up and desperately trying to return his surviving family to some semblance of happiness and normalcy while dealing with a severely troubled son and coldly stubborn wife.
J. R. Stuart has coaxed solid work from these and the rest of the cast, and makes a memorable appearance himself as Conrad’s quirky psychologist, Dr. Berger.  There are also some nice turns by Phillip Rivera and Drew Cash as Conrad’s friend and “frenemy,” respectively, and by Julie Streble and Lindsay Vincent as the two potential love interests in Conrad’s life.
As the play is performed in the chapel of a church, the lack of any stage lighting takes some getting used to (the full house lighting you see when you enter the theater is the same as you get during the entire performance), but you do get used to it pretty quickly. Despite my issues with the script, this is easily one of the best pieces of Community Theater I have seen in quite some time and I can’t recommend it enough!
Starring Kyle Braun, Drew Cash, Phillip Rivera, Julie Streble, J. R. Stuart, Tiffany Taylor, Tom Trudgeon, Gabe Vanover and Lindsay Vincent.
Ordinary People
Presented at St. Mark’s United Church of Christ Chapel on Spring
222 East Spring Street, New Albany, Indiana
December 6-10 at 8 p.m. • December 11 at 2 p.m.
General Seating – $10
https://www.facebook.com/notes/jr-stuart/st-marks-stage-on-spring-presents-ordinary-people-based-on-the-novel-by-judith-g/10150416532819665
Posted by Arts-Louisville at 10:25 PM